Who is Stacy Eckert? 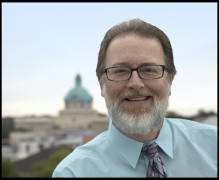 Stacy Eckert was born and raised in Northwestern Ohio.  His father was a member of the UAW, a journeyman machinest, millwright and a small scale farmer. Following local tradiiton at a very young age Mr. Eckert starting working on his family's farm and other local farms.  He enlisted in the United States Navy after high school and served six years as a Hospital Corpsman (a medic). In 1984, upon finishing his tour of duty with the Navy, he moved to Florida and completed his undergraduate college education  first at Daytona State Community College (now Daytona State College), and then at Florida International University in Miami. Upon graduation from FIU he moved to back to West Volusia County and began teaching high school Economics, American Government and World History at Father Lopez High School in Daytona Beach.﻿﻿﻿

Mr. Eckert has always had an interest in the law and its applications and decided to make a career change and was blessed to attend the University of Florida Law School. While attending law school, Mr. Eckert worked as a law clerk for a Gainesville law firm assisting its attorneys in debt collection and a variety of civil litigation cases. He graduated from law school in the top 20% of his class.﻿﻿﻿ The work experience he gained as law clerk has served him very well as an attorney.

In 1993, Mr. Eckert returned to West Volusia County and began work as an associate for a small local law firm. In 1995, he started a solo practice in Orange City, Florida, later expanding his practice to a branch office in Daytona Beach, Florida. Besides a full-time law practice, Mr. Eckert has served as President of Community Legal of Mid-Florida, Inc., a non-profit law firm that provides free legal services to low-income clients in twelve Central Florida counties. He also served in some capacity on its Board of Directors and its predecessor corporations for over twelve years. Mr. Eckert was a member and a former President of the Kiwanis Club of Deltona, he has worked as an Adjunct Professor at Daytona State College﻿﻿, and as a member of the Board of Directors of Habitat for Humanity.  He currently serves as Vice-Chair on the Planning and Land Development Commission for the City of Lake Helen, Florida.

Today, Mr. Eckert is the loving grandfather of six grandchildren, and a dedicated attorney and counselor serving the residents of Volusia County and Seminole County, Florida.  He works day by day, including weekends, to ensure that any legal matter for which he is engaged is handled with a level of professionalism, quality, and care that you can rely on in a time of need.